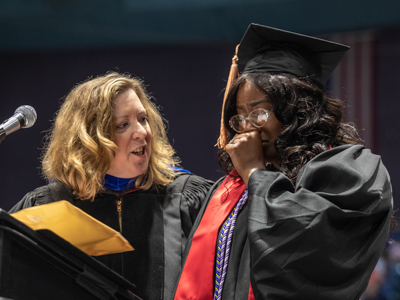 Copiah-Lincoln Community College graduate Trinity Bournes Brown recently graduated with a Bachelor of Science degree in Nursing from the University of Mississippi Medical Center. During the commencement ceremony, Brown was named the recipient of the prestigious Christine L. Oglevee Memorial Award for the outstanding School of Nursing baccalaureate graduate. Brown was one of only six students recognized during UMMC’s commencement ceremony that saw 853 degrees conferred.

While at Co-Lin, Brown was a Taylor Presidential Scholar and was inducted into the college’s Hall of Fame. She was a Trailblazer and a member of Phi Theta Kappa. She graduated in May of 2017.